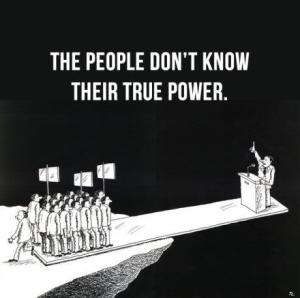 Wow! These times have become a giant Rubick’s Cube to try and figure out! I have come to one understanding which I found profound. I see the whacked out political drama as a distinct display of two different consciousness factions fighting to gain power over the other. This is no simple Dems vs Repubs race this time around. It is the final battle between those awake and those asleep and that is why there can be no productive discourse between the people. There is no convincing different mindsets to change, there will be no crossing over to the other side going on here. The awake are awake and will never accept what the asleep are offering, more sleep, likewise the asleep are unable to accept the awakened way of serving the people because they either cannot or will not accept the truth of reality right now.

I struggle everyday with trying to understand how anyone who has lived these last eight years can possibly want four or eight more of the same. Didn’t they suffer through the corruption, lies and oppression just like everyone else did? Are they not just as susceptible to encountering an Isis attack as the rest of us? It blows my mind really. Obama has a high favor-ability rating right now. Really? How can anyone awake be in favor of a man who has driven America off the rails and into shark infested waters? It would seem it all comes down to what you believe in, fact or fiction and so this years presidential race is being steered by ‘if we believe in the lies still or if we have found the courage to see the truth and awakened’. This presidential race has become the battlefield for the final end game and the stakes have never been higher. People can only wake up if they want to, when they want to. It’s a lot of holding our breath and crossing our fingers right now to see what transpires.

We tend to insist we will believe what we want to believe and screw everything else. The only trouble is the world’s survival is at stake here. If people are hellbent on staying true to their party despite evidence to the contrary, then that is what is going to happen. The truth be damned, our freedom be damned. Scary times to say the least. I truly don’t want a lot of angry political push back on this in my comments, I don’t wish to be a part of the whole political sham in the first place and that is what is. The whole two-party system was nothing more than a bogus fantasy to make us think we were free to choose. Wrong. Wikileaks proved that point. I just am merely writing out my thoughts about what I see occurring in the world around me. These are difficult times to wade through and sharing our experience is key to keeping us together. Hang in there everyone and stay open to the truth! It’s what makes the world go round.